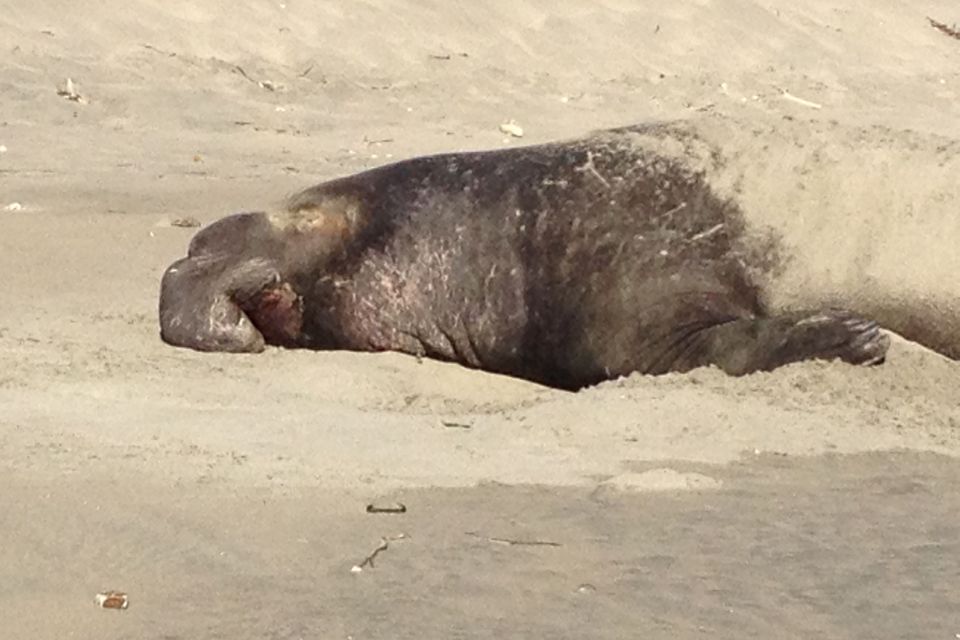 As much of the country was shivering from arctic air mass, a group of volunteers was out on January 5 in the Point Reyes sun promoting our wildlife visitors.

We will spend the next four months at Chimney Rock, the Lighthouse and Drake’s Beach telling stories about Gray Whales, Elephant Seals, land and sea birds, snakes and wild flowers. Here’s an album of my first docent day, much of it spent trying to make sure that unsuspecting visitors didn’t approach the 6,000 pound Elephant Seal who was taking a break on Drake’s beach after many days of fighting.

I began the day seeing five Grey Whales passing by the Pt. Reyes Lighthouse around 10 am. About 18 passed by that day, all heading south to Mexico to birth their young. If you look in the middle of this photo toward the left, you can see a couple of small spouts. Those were two of the whales we saw at about 10am.

As the day went on, visitors had to walk down the 300 stairs to see the passing whales as the fog had rolled in at the Lighthouse (as it often does). 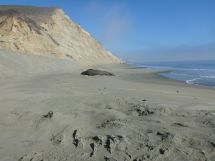 Drake’s Beach becomes a flop house for male Elephant Seals who are fighting for status to mate with females. We saw about 30 on the north part of the beach on Saturday. 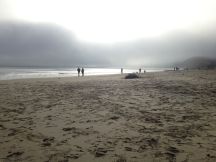 Many people passed the 6,000 pound Elephant Seal on Drake’s Beach on Saturday, January 5. Several thought he was no longer living because he hardly moved. 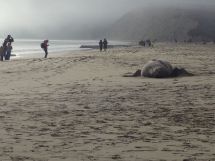 Photos were a favorite of those visiting from overseas since they figured they wouldn’t see Elephant Seals again.

It was unclear whether this juvenile elephant seal was healthy or not. Sometimes it’s hard to tell because they don’t move that much either way.

I walked by another Elephant Seal at the North End of Drake’s Beach. He had a bloodied nose, meaning that he had probably been fighting just days earlier. Depleted, he was resting to shore up energy to go back again to fight and mate.

You will often hear the rocks tumbling down the mountain side here, with the land constantly in motion.

Western Sandpipers wove in and out of the surf, ignoring the large mammals passing by.