On Thursday, May 16, the Skulls exhibit will open at the California Academy of Sciences in Golden Gate Park in San Francisco. The exhibit features a collection of skulls that will provide a fascinating look into nature’s engineering while telling us all about the lifestyle of many animals. 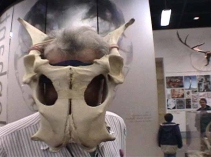 Perhaps as fascinating (if not more) is the story of the man who collected the majority of the skulls in this exhibit. At 86 years old, Ray Bandar has been collecting skulls for Cal Academy for more than 60 years. Many of the skulls he collected (approximately 7,000) are in his house in what he calls his Skull Palace, a basement room stacked high with bones and skulls. The exhibit will have a selection of those skulls along with hands-on activities for all ages.

My favorite part of the exhibit features a wall of sea lion skulls. The diversity of those skulls is remarkable as it tells the story of individual variation in one species. In front of that wall of sea lions is a video featuring Ray Bandar, much of it from my movie, Ray Bandar: A Life with Skulls, which I began back in 2003 when I first met Ray.

The inspiration for the movie occurred when I was on a backstage tour of the last Skulls exhibit at Cal Academy. During my tour, Ray told his bounty of tales with a boyish exuberance that I felt I needed to capture on video. He brought every skull to life with a tale: mammals dying because their horns locked when they were fighting, marine mammals with shotguns shells in their heads, how dogs represented man-made evolution and bears that had become obese on human food.

In search for a complete story about Ray’s passion, I interviewed his friends, colleagues and wife and followed him out on an excursion to collect the skull of a harbor porpoise. My own three-year journey with Ray would eventually turn into a 30-minute movie called Ray Bandar: A Life with Skulls, which was shown on PBS. You can buy the movie (with an hour of extras), from Amazon.com.